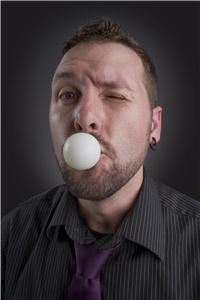 Matt Baker’s headline comedy show has been making colleges, corporate functions, festivals and special events just like yours fun and exciting for over 10 years. Formerly of the comedy group Brothers from Different Mothers, Matt has performed over 2,000 shows in 14 different countries and in every imaginable scenario. He is easy to work with, flexible and his show is self-contained which allows you to focus on the aspects of your event that actually need your attention. “Hilarious and amazing” is how the Seattle Times describes Matt Baker’s comedy stunt show. Matt’s show is a unique combination of a hilarious stand up comedy and amazing stunts. His hip, energetic, comedy stunt show is action packed with funny stories, audience participation and incredible skills that engage even the toughest crowd. His unique comfort level on stage sets the crowd at ease and allows them to want to be involved in every show. With clever comedy and jaw dropping stunts like catching a horse with his face, spearing vegetables on spikes, escaping handcuffs and juggling with his mouth, Matt’s show rivals no other. Matt even integrates custom material specific to your audience. Themes, products, messages, volunteers and inside jokes are things that will have your attendees talking about your event long after it’s over. Whether it’s performing his comedy stunt show or acting as master of ceremonies, Matt will provide you with the type of entertainment your event deserves: the best! There are many imitators, but there is only one Matt Baker.

Matt of All Stunts - An Eventective User from Rockaway Beach, Oregon

He kept us in stitches and in awe at his stunts. The only thing he didn't do is juggle seven balls while standing on his head and twirling a couple of hoola hoops with his feet! A really funny guy!

the secret ingredient for a great night - An Eventective User from Redmond, Washington

Matt rocked our shows (a children's show AND a benefit show) as emcee and really brought the evening together, kept the audience laughing and the evening running flawlessly. We'd book him again anytime.