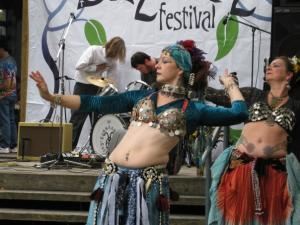 During the 1980’s, an American phenomenon emerged and came to be known as American Tribal Style Bellydance, a dance form which has been described as ethnically-inspired, drawing on a multitude of cultures, customs, and spiritual practices. Tribal bellydance continues to evolve, and there are now as many variations on the original tribal style as one can imagine. The common thread uniting all tribal dancers, however, is empowerment of the feminine spirit! We are a group of women from Madison County in Central New York State, ranging in age from our teens to our 60’s, united in our passion for our chosen dance form. We embrace as our inspiration the ritual dances of pre-Christian tribeswomen, dances which were performed by women and for women, usually to encourage and honor a woman in labor. Over the centuries, as trade routes developed, these dances picked up influences from the Far East to North Africa. Through the millennia, many indigenous peoples kept ritual dance alive through local cultural and/or religious customs. We add the term, “World Fusion Bellydance” to our name to reflect the diverse nature of our approach to dance. In our performances, you will see not only dances which are Middle Eastern, but elements of yoga, trance dance, martial arts influences, and the whimsy of each individual dancer’s heart. The name, Adi Shakti, derives from the Sanskrit to describe the concept of the all-encompassing, omnipresent divine feminine—that energy which is creative, evolutionary—the life energy. We strive to honor and convey this energy through performing our interpretation of this ancient dance.