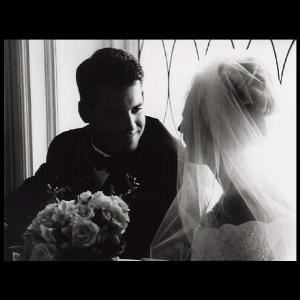 Wedding photography is exciting work. I try to creatively capture what my clients tell me is important to them through lots of candid images and small but telling details. Though this site features black and white, I can also work in color. I'm looking forward to making ART with you and of you, Fran

An unintrusive wedding photographer that went with the flow - An Eventective User from Maplewood, NJ

Fran and her assistant photographer, Zach, were great. There were a few specific shots the bride wanted and she scoped them out in advance. Fran worked with me in advance on ordering the posed photos. Before the ceremony, Fran was with the bride, her attendants and her family, while Zach was with the groom and his entourage. During the ceremony and reception, they both moved in and got the shots and moved out of the way. Because there were two of them, there were twice as many opportunities to get the perfect picture. Nothing had to be repeated and they did not appear to be in anyone's way. Rates were the best we found when phoning around. An A+ team!